We've got four locations in Michigan with regular monthly games:
AFK Games in Holt/Lansing, Nostalgia Ink in Jackson,
BC Comix & Games in Battle Creek, and Guild of Blades in Clawson.
Check the schedule for a game near you.

PLEASE NOTE: We're at a new location: Hollow Mountain Comics, Collectibles and Games at 611 East Grand River Ave (Downstairs), East Lansing, MI 48824. The map below shows Hollow Mountain's location as well as where you can park for free after 6:00 p.m., outlined in red. The blue outlines are lots where parking is $1.50 per hour. 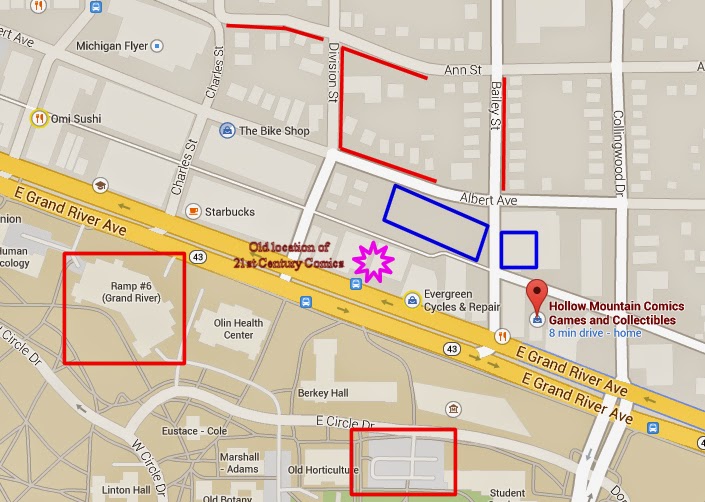 The following rule is a "house" rule and is used simply to ensure that the entire mapsheets are available for use:

Note: If there is any question about the disposition of the underlying terrain, then the GameMaster will have sole discretion for deciding what said terrain is (if the "majority terrain" rule doesn't resolve the disposition of said hex).

All other rules found in the Advanced Options will be implemented on a case-by-case basis depending on whether or not they are applicable to the scenario or units.